Combo Ticket: includes a round trip ropeway ticket, admission to Toshogu Shrine and the Museum *Combo Tickets are only available at Nihondaira Station (We accept Japanese yen only)

Price
3,500 yen
*General Fare: Adult One Way 700 yen, Round Trip 1,250 yen
Discount
Admission to the Shrine: 500 yen → 400 yen
Admission to the Museum: 400 yen → 350yen
The Shrine + Museum: 800 yen → 700 yen
Valid Period
A pass is valid for one (1) year from the date of purchase.
Who Can Purchase a Pass
A pass is non-transferable and can only be issued to an individual, not a business.
Where to Purchase
A pass can be purchased at Nihondaira Station and Kunouzan Station

Group Discount: General Group (25 or more) * One (1) person will receive one (1) free complementary ticket (limit six (6) free tickets) for every 50 tickets purchased in one (1) transaction.

Student Group Discount Nursery School, Kindergarten, Elementary School and Junior High School:
* One (1) teacher/instructor will receive one (1) free complementary ticket for every 30 student tickets purchased.
* Companion parents are included in the total number of students.
High School, Vocational College and University:
One (1) person will receive one (1) free complementary ticket (limit six (6) free tickets) for every 50 tickets purchased in one (1) transaction.

All animals must fit entirety within pet carriers during the ropeway ride.

The ropeway changes its departing schedule to every 5 minutes when experiencing heavy passenger volume. Please note that gondolas may leave earlier than the regularly scheduled time when this occurs. The ropeway may also run on a special time table during peak seasons and holidays.

Kunouzan is believed to be named after the founder Kuno Tadahito, who established a temple dedicated to Kannon-Bosatsu, during the time of Emperor Suiko (circa 600 A.D.) The temple was named Hodaraku-san Kuno-ji Temple.

Kuno-ji Temple was once a flourishing complex consisting of over 330 buildings attracting many famous Buddhist monks including Gyoki. However, this ended due to a fire at the base of the mountain around 1225 (circa Karoku 2-3). Nothing remains of the original complex.

In 1568 (Eiroku 11), Kuno-ji Temple was moved to Kitayabe (now Tesshu-ji Temple in Shimizu Ward, Shizuoka City) by an order of Takeda Shingen after he learned the terrain of Kunouzan was impregnable. A castle was build atop Kunouzan and was named Kuno-jo Castle.

After ousting Takeda in 1582 (Tensho 11), Kunouzan and all lands within Suruga-no-kuni (now Shizuoka Prefecture) became possessions of the Tokugawa clan.

Although the castle fell into disrepair after Lord Ieyasu’s death on April 17th 1616 (Genna 2), Toshogu Shrine was built and still remains to the present day.

Tokugawa Ieyasu, the deity of the Toshogu Shrine, was born on December 26th 1542 (Tembun 11) in Okazaki Castle in Mikawa-no-kuni (now Aichi Prefecture). He was sent as a political hostage to secure an alliance during the Warring States period, or Sengoku period. He successfully overcame his hardships from spending his childhood as a hostage. He assumed the title of Seiidaishogun (barbarian-subduing generalissimo). Under his rule, Japan recovered quickly from the turmoil of the warfare. The era of peace had begun with evolving industrial, academic and cultural growth.

Lord Ieyasu spent his later years at Sumpu-jo Castle in Suruga-no-kuni (now Shizuoka Prefecture). He passed on April 17th, 1616 (Genna 2) at the age of 75. On his deathbed, Lord Ieyasu ordered his retainers to bury his remains in Kunouzan, and his remains were entombed according to his will. The 2nd Shogun, Lord Hidetada, appointed Nakai Masakiyo as principal architect and master builder to construct a shrine to worship Lord Ieyasu. The construction began in May of 1616 and the Kunouzan Toshogu Shrine was completed 19 months later.

The shaden (shrine buildings), are built in the Gongen-zukuri style using Edo Period state-of-the-art architectural and art techniques. The main shrine building is the model used for all Toshogu Shrines, including the one in Nikko City, Tochigi Prefecture. The construction of the shrine was conducted by the principal architect, Nakai Masakiyo, who built historically significant structures including Nagoya-jo Castle (a Designated Special Historic Site), Ninna-ji Temple (an Important Cultural Property) and Nijo-jo Castle (a National Treasure and World Heritage Site). Kunouzan Toshogu Shrine has been designated a National Treasure since 2010 as Nakai’s last masterpiece.

The major restoration of Kunouzan Toshogu Shrine’s buildings has finally been completed.

The vibrant colors and state-of-the-art techniques of the Edo Period will take you back in time. With your own eyes, experience the excellent works and heritage of those who came before us. 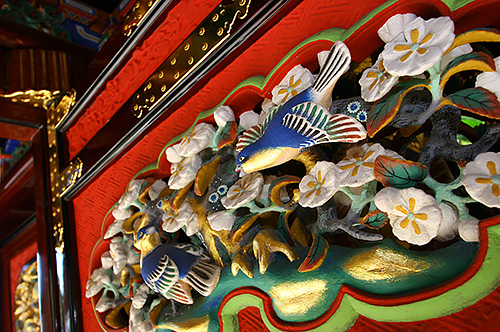 From JR Shizuoka Station, take either a Shizutetsu Justline Bus or taxi.